Posted on October 13, 2012 by Pete Maxwell
Spread the love
Tweet

In the years he has been taking LSD, bathroom tiler Joely T has seen melting trees, friends morph into fantastical creatures and sound vibrations warp the sky. A recurring trip has him crawling inside his own brain and shifting about thoughts and feelings like paper in a filing cabinet.

The 29-year-old tradesman from Blacktown describes his ”journeys” with the psychedelic drug as blissful, playful, almost healing, despite the health risks. ”Everything rational became irrational. It was very colourful, very bright. I started questioning a lot of things about myself and others,” he says. 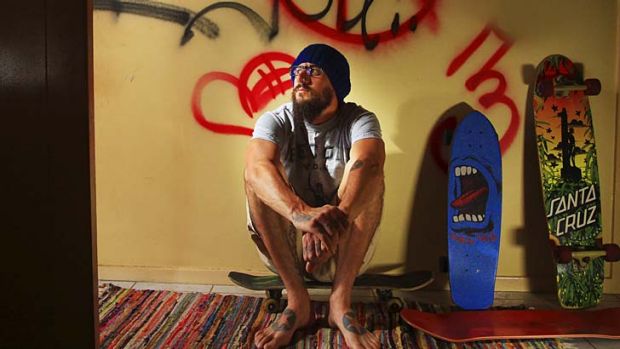 Joely T has been dropping acid and other hallucinogenic drugs – such as ”magic mushrooms”, DMT and mescaline – about once a month over the past decade. ”I like the ability of having this tool of being able to go into places I would not normally go,” he says.

Such psychedelics are more commonly consigned to the freewheeling 1960s, when they gained notoriety as part of the counter-cultural movement. But interest in LSD and other hallucinogenics has grown in recent years, particularly among 20- to 29-year-olds.

Many young users are keenly experimenting with a growing range of psychedelics, including new strains of synthetic drugs sold online. They have dubbed themselves the YOLO (”you only live once”) generation: curious, but careless or unconvinced about the possible health risks.

The violent death of Brazilian student Roberto Laudisio Curti, who was shot by police Tasers 14 times on Pitt Street in March, may do little to dull such behaviour.

An inquest into the 21-year-old’s death heard this week he was in a highly agitated and paranoid state, believing people were trying to kill him, after consuming part of a tab of LSD with friends.

Despite this, the drug educator Paul Dillon says secondary school students have recently started asking him about sucking on sugar cubes laced with LSD – something he had not heard of for many years. They also want to know how best to help someone suffering from a ”bad trip”. ”We’re coming back into a hallucinogenic period,” he says.

Many young people have started using hallucinogens because they are becoming more accessible and are relatively cheap, with LSD costing about $20 a tab, says Dillon, the director of Drug and Alcohol Research and Training Australia.

”Young people look for bang for their buck,” he says.

”These are drugs where the quality is reasonably stable and the effect lasts for a long time, and the chances of them getting caught by sniffer dogs are much lower.

”When I am going into schools and seeing kids aged 14 and 15 messing around with magic mushrooms, the greatest concern is we are talking about a developing brain, and these drugs mess around with your perception.”

The number of Australians saying they recently used hallucinogens more than doubled between 2007 and 2010, to 1.4 per cent of the population aged 14 and above, according to the latest National Drug Strategy Household Survey.

While ecstasy use has declined in recent years, largely because of reduced availability and purity, almost one in 10 people now report having used hallucinogens in their lifetime. The adverse risks of such drug use include fear, anxiety, depression, flashbacks or prolonged psychosis.

But many younger drug users believe hallucinogens – which have a relatively low risk of addiction or overdose compared with drugs such as methamphetamine – are harmless, Dillon says.

”One kid said to me about six months ago that, ‘We are the YOLO generation’. The whole notion behind it is, ‘Why worry about the harms? We only get one life so we might as well live it to the max.”’

This trend goes beyond psychedelic drugs such as LSD.

The National Drug and Alcohol Research Centre warned this week that regular ecstasy users were increasingly taking capsules ”of unknown content” – with 12 per cent of users saying they took drugs despite not knowing what was in them. The same study indicated LSD use among this small cohort had declined in the past year.

Dillon says a tendency by health agencies and police to overstate the incidence of harm from illicit drug use had desensitised some young people. ”I have been giving drug prevention messages for well over 25 years and messages we could give to people about harms used to be a pretty effective barrier for some people. Now that doesn’t even touch the sides,” he says.

”We put out warnings so regularly about drugs having dangerous things in them and you can only cry wolf so many times.

”In this generation there is a percentage of them who believe it is worth the risk. They are media-savvy, they are the YOLO generation. We need to be really savvy about what information we give them.”

Joely T was 16 when he first took LSD with older friends. ”I was pretty young and naive but it seemed like something fun to do at the time, and indeed it was,” he says.

He believes there are no risks in the recreational use of hallucinogens. ”It’s like anything: if you go to the gym every day and push yourself there are going to be side effects but if you are doing something recreationally and in a controlled environment, I can’t see any risks in the short or long term.”

Nick, a 25-year-old university student, was 18 when he first dropped acid, on a beach at night with friends. ”I was initially scared but it was mostly curiosity,” he says. ”We thought a little hole in the sand was the centre of the universe, we danced to the sound of waves under the stars and we saw a pile of sticks that we were convinced was a pterodactyl.”

He has since used LSD more than 30 times, mostly at home in Melbourne, he says. On occasions taking hallucinogens has made him feel anxious and uncomfortable, particularly among crowds of people. ”Some people say it’s associated with the ’60s but there is a resurgence going on at the moment, mostly due to the rave scene.”

Nick, who did not want his surname published, says he tries to minimise possible health risks by buying illicit drugs from people he knows and researching possible side-effects online. But he admits he can never be certain of what he is taking. ”It’s hard with the black market to know exactly what the substance is,” he says.

”I’ve taken things before that I haven’t quite known what they are but I can make a general assumption based on other people’s experiences that it is not bad. There is a vast community of people that warn people if someone has made a bad batch.”

St Vincent’s has seen an increase in recent years of LSD users suffering agitation, anxiety and disorientation, he says. ”They don’t know what they are doing. When you lose control of your brain anything can happen. You can walk in front of cars or off buildings,” he says.

”LSD was basically dead as a doornail for a long time but in the last few years it has crept up again to a handful of cases coming to the emergency department each month.”

He attributes the growing popularity of hallucinogens to experimentation and fashion. ”It’s why jeans go out of fashion. People want to do something different, something new … And everything old is new again.”

NSW police detections of hallucinogens increased from 95 in 2008 to 175 last year, from an admittedly low base (methamphetamine detections, by comparison, are almost 4000 so far this year). The drug squad’s acting intelligence manager, Claire Rickards, says this rise may be due in part to improved police record-keeping. ”It is a very, very small problem with comparison to other drugs,” she says. However, drug experts warn of the growing threat from new strains of psychedelic drugs entering the market through online overseas retailers. In March a South Australian man died from injuries sustained by repeatedly running into trees and poles after taking a new derivative, available online, of the potent hallucinogen 2C-B.

”There is a generation now that is more comfortable with taking pills than ever before without knowing the content of those pills, and that’s a concern,” says Gino Vumbaca, executive director of the Australian National Council on Drugs, the government’s principal advisory body.

Dr Lucy Burns, the manager of drug trends at the National Drug and Alcohol Research Centre, says the centre’s surveys of 600 ecstasy users reveals they are taking a more diverse spread of new and emerging psychoactive substances.

There is a growing illicit capsule market in Australia where users are not necessarily aware of what they are consuming, she says.