Posted on March 6, 2013 by Pete Maxwell
Spread the love 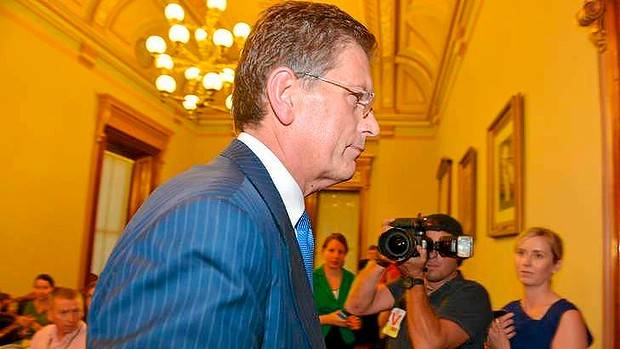 Ted Baillieu has resigned as Premier after a Liberals-only crisis meeting on Wednesday night, saying “I do this in the best interests of the government”.

Denis Napthine is the new leader and Mr Baillieu will remain in parliament.

“I love this state, I love the Liberal Party and I love this role that I have had the honour to enjoy over the last two and a bit years,” Mr Baillieu told reporters.

“It is apparent to me that a change of leadership is in the best interests of the government.

“I want to thank the people of Victoria. I wish Denis Napthine the best. He has my full support. He’s an outstanding individual.”

Mr Baillieu said he would shortly visit the governor to tender his resignation. He thanked his family and said the most important thing is the people of Victoria.

Dr Napthine previously led the Victorian Liberal Party in opposition but was deposed by Robert Doyle in 2002.

“Ted has put his heart and soul into the Victorian Liberal Party … for the best part of three decades,” Dr Napthine said.

“He is an outstanding individual. He is not just a colleague, he is a great friend.”

Dr Napthine, who turns 61 today, declared to reporters that he would ”lead the party to the next election”.

Although his press conference was briefly interrupted by division bells, he remained calm. He dodged questions about how the events of the evening had unfolded, saying that was a matter for Mr Baillieu to explain.

He also declared the state’s currents woes should be blamed on Julia Gillard and the federal government.

How it happened: 5.30pm update

Ted Baillieu’s government is in crisis following the resignation of its most controversial backbencher, but the Premier insists he will continue to govern ”decisively” despite losing his one-seat majority.

In an extraordinary day in Victorian politics, the Coalition was rocked by revelations that embattled Frankston MP Geoff Shaw had quit the Liberal Party to sit on the crossbenches as an independent.

Mr Shaw — who is still under police investigation for rorting his taxpayer-funded car — made the shock announcement in a letter to Mr Baillieu on Wednesday morning, but the pair have not spoken since.

His decision means the government is now on the grip of a hung parliament — with Mr Shaw set to  become the new kingmaker in a deadlocked Legislative Assembly.

Before today, the Coalition held 44 seats in the 88-member lower house, excluding the Speaker’s.

But Mr Shaw’s exit means the government now has only 43 votes on the floor of the parliament – equal to the number of votes Labor will hold, assuming it retains the safe seat of Lyndhurst, formerly held by Tim Holding, at next month’s bi-election. (The Liberal Party has chosen not to run a candidate).

Shell-shocked government MPs were called into a crisis meeting in parliament this morning where Mr Baillieu delivered the news. But the Premier emerged from that meeting saying he was confident he would continue to govern in Victoria despite his tenuous grip on power now being into doubt.

Asked if he was angry with Mr Shaw — whom the Premier has continued to defend as ”a good local member” despite his past conduct — Mr Baillieu replied: ”My job doesn’t allow me the luxury of emotions.”

”I’d rather not be in this situation, but this is the situation we’re in,” he said. ”The constitution is clear on these matters and we will continue to govern.”

The Coalition will now have to rely on Mr Shaw’s vote to get bills through the parliament, although by late this afternoon it was still not clear what the Frankston MPs voting intentions were.

Mr Baillieu suggested creating a charter arrangement, similar to past minority governments, but added:  ”At this stage he hasn’t put … demands in writing, and we will discuss these issues with him.”

The tapes, obtained by the Herald Sun, found Mr Weston, a former adviser to Deputy Premier Peter Ryan, was paid $22,500 by the Liberal Party after he quit amid the scandal – a payment Labor has described as ”hush money”.

Mr Baillieu has since referred the matter to the government’s anti-corruption watchdog, but insists there has been no serious corruption involved.

However, the tapes — which come on top of another poor Newspoll this week and Victoria plunging into recession today — has further undermined the Premier’s leadership.

Senior MPs on Tuesday warned that Mr Baillieu is ”one or two more stuff ups” away from a spill, with some agitating for Planning Minister Matthew Guy to mount a challenge.

Labor leader Daniel Andrews said it was clear the government was in crisis, but he would not be seeking Mr Shaw’s vote.

”(Ted Baillieu) is not so much running a government; he is running a complete and utter circus,” Mr Andrews said.

”This government is doing nothing to deliver for the people of this state other than to lurch from one crisis to the next.”

Mr Shaw’s resignation is the latest twist in what has so far been a colorful career. The 45-year-old businessman has been mired in controversy since he won the lower-house seat of Frankston in 2010. In May 2012, it was alleged his staff, as well as Mr Shaw himself, had used his parliamentary car for business related to his hardware factory.

The matter was subject to an Ombudsman’s investigation, and police late last year launched a criminal investigation into the issue.

Despite the scandal — and repeated calls for Mr Shaw to be sacked — Mr Baillieu continued to defend him as a ”good local member.”

Deputy Premier Peter Ryan insisted this afternoon that the government was not in crisis and that ”until the (Lyndhurst) byelection on the 27th of April, the government has the numbers.”

Asked if he supported Mr Baillieu, he said he had ”absolute and utter confidence in the Premier” and insisted he was doing a ”magnificent job.”