Behind the Scenes of the Australian Open

Posted on February 4, 2015 by Pete Maxwell
Spread the love

As I complete my 26th Australian Open (one year of my life has now been spent in this arena), I thought I would reflect on how AP covers this major sports event and how our coverage has evolved in the digital age since my first Open in 1989.

It was a time of no computers, no Internet, no Wi-Fi, and we never dreamed of transmitting directly from the camera within seconds of capturing compelling moments with the quality we enjoy now. 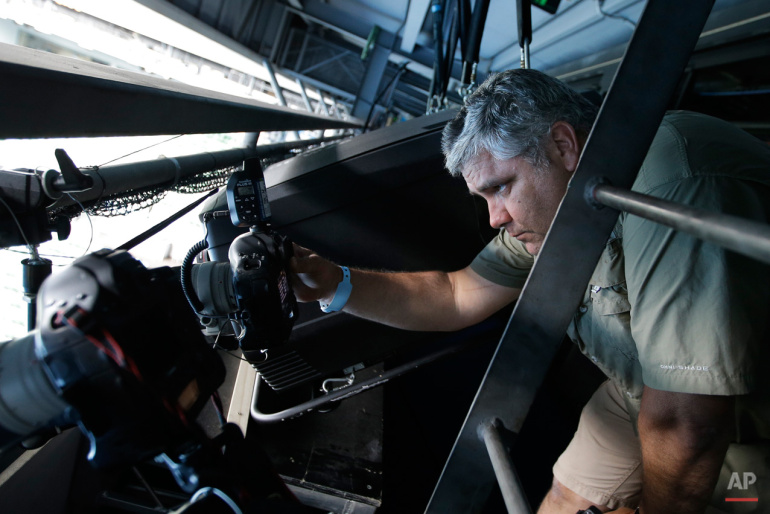 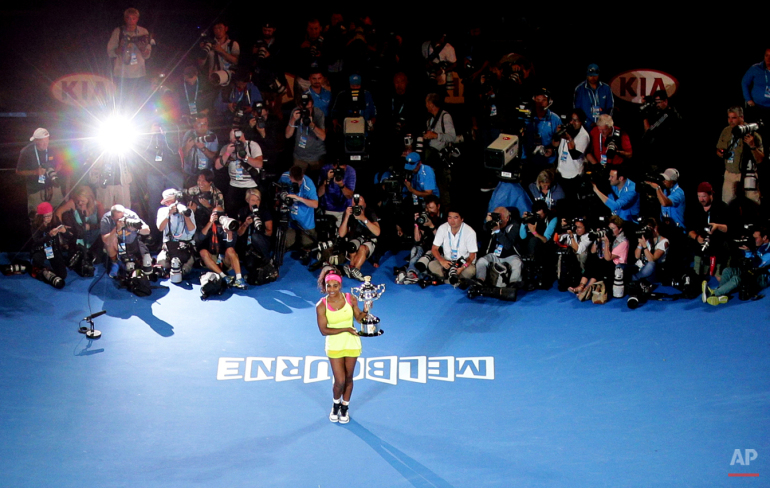 Serena Williams of the U.S. poses the trophy after defeating Maria Sharapova of Russia in the women’s singles final at the Australian Open tennis championship in Melbourne, Australia, Saturday, Jan. 31, 2015.

The biggest change has been the camera, the move from the film camera’s four frames a second to the digital’s 14 frames a second. The digital camera now is a sophisticated piece of equipment, a computer and transmission system all in one. The 10-by-8 inch black-and-white or color prints have been replaced by a 60-megabyte digital file, compressed in JPEG to 2-3 megabytes, the 30-minute analogue transmissions of a color print to five seconds for a color digital file.

Kodak film, so synonymous with our industry for over 100 years, is assigned to history. We now use 16-gigabyte flash cards and can shoot at 5000 ISO, enabling picture taking in very low light at close to 10 times the quality that film ever gave us.

Manual focus lenses and the skill to use them are gone, replaced by super-fast autofocus lenses, with faster apertures and increased sharpness and quality never imagined when the first digital cameras were introduced late in the 20th century.

Technology has improved so much that we are incredibly reliant on it always working, as well as having the latest computers and the tech staff in place to maintain all our connectivity, which is a constant battle when we rely solely on a Wi-Fi network to move our pictures within this venue. 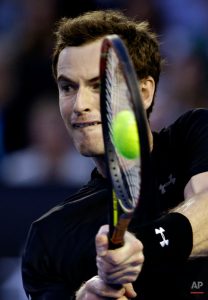 Andy Murray of Britain makes a backhand return to Nick Kyrgios of Australia during their quarterfinal match at the Australian Open tennis championship in Melbourne, Australia, Tuesday, Jan. 27, 2015.

So what have these changes meant?

In the film days a photographer might shoot between 10 and 15 rolls a day or a maximum of 550 images. Now, photographers will shoot from 2,000 to 2,500 frames a day. Multiply that by five staffers over 14 days and I was casting my eyes over more than 150,000 images during the Open. Of the approximately 12,000 images taken each day, some 300 plus make it to our customers.

The photographer now files directly from his camera live with a Wi-Fi device to the editors in a cabin located about 50 meters from the main court, where we select, crop, tone, caption and send images to our clients and their customers now see them within minutes of the events taking place on the tennis court.

We have remote cameras set up in the roof of the main court for the finals in Rod Laver Arena, which are fired by the photographers on match point and during the trophy presentation. These cameras are placed where photographers are not allowed to be stationed during a match and offer a view and perspective not normally seen, adding more variety to our file from the men’s and women’s finals

So what hasn’t changed?

The players still have to battle out there on court for three and five set matches in extreme heat and the photographer still has to capture the peak moment of action or reaction. Whether it is Pete Sampras crying, John McEnroe being disqualified, Novak Djokovic tearing his shirt off after the longest men’s final ever played, or Serena Williams leaping in celebration, there is a defining image and we are expected to get it and get it to you. 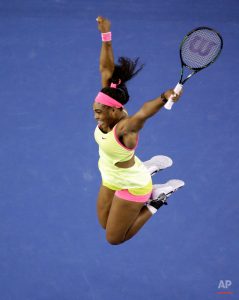 Serena Williams of the U.S. celebrates after defeating Maria Sharapova of Russia in their women’s singles final at the Australian Open tennis championship in Melbourne, Australia, Saturday, Jan. 31, 2015.

So the 2015 Open is over, two of the game’s great players, Williams and Djokovic, have added another Australian Open to their tallies, and as we left the venue at about 2:30 a.m., waiting for the transport to take us home, the men’s champion walked down the corridor carrying his newly acquired trophy followed by his coach and former champion, Boris Becker. It is rare for us to see them off the court but seemed a fitting end to our 16-day assignment.

Tennis photography isn’t just a backhand, a forehand, a serve or even raised arms in celebration; we have tried to see more from the game using as much of the latest technology, the light and the talent of our photographers to illustrate events on the court.

The AP team of Bernat Armangue, chief photographer for South Asia, based in New Delhi; Lee Jin-man from Seoul; Vincent Thian from Kuala Lumpur; Rob Griffith from Sydney; Melbourne stringer Andy Brownbill; super editor Shuji Kajiyama from Tokyo, and our tireless technician from Bangkok, Kittisak Sataporn, were all instrumental in making this year’s coverage a success. We hope you enjoy this small sample of their work

Remember there are another 148,980 not attached!