Doctors are practising what they leech

Posted on October 29, 2011 by Pete Maxwell
Spread the love
Tweet 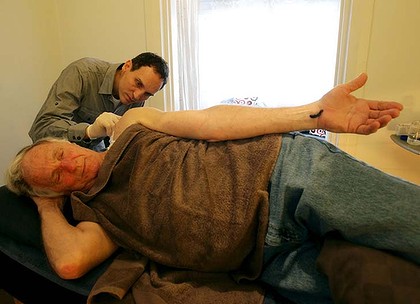 IF YOU think your job sucks spare a thought for the Richardsonianus australis, a species of leech increasingly being used for medicinal purposes.

The practice of leech therapy has been around for more than 2000 years, with the creatures used to treat everything from hysteria to haemorrhoids. They fell out of favour with the advent of modern medicine but are back in vogue and being used by both mainstream medics and alternative practitioners.

The Richardsonianus australis, a species from Victoria, has been used in NSW public hospitals for about a decade, mainly in the field of microsurgery. Now alternative practitioners in Australia have latched on to the leech as a treatment for conditions such as varicose veins, deep vein thrombosis and arthritis.

And clinics overseas offer leech therapy as a beauty treatment. Stefan Hafner, a Sydney leech therapist who has worked as a paramedic and has a background in acupuncture, has been using the creatures for about a year.

”They are very effective for certain conditions,” he said. ”The main active ingredient in their saliva is called hirudin, which is a very strong anticoagulant. Leeches can be used to treat any condition where you have pooled blood, such as varicose veins, deep vein thrombosis, bruising or osteoarthritis of the knee.

”It’s about breaking down coagulated blood which blocks blood flow to the area.”

He admits some patients are squeamish about the idea of having the parasites on their body.

”Some people are really for it; they are really interested,” he said. ”Other people just find it too gross.”

Hafner buys his beasts from a leech farmer in Victoria (”He posts them by express mail”) and retires them after use.

”I can’t reuse them because of the risk of cross infection,” he said. ”So I keep them in a retirement jar and have them on display in the clinic so people can look at them. In a hospital setting, they usually get killed.”

A spokeswoman for NSW Health said leeches were used in about six public hospitals in the state, generally in plastic surgery to reduce blood clots after skin grafts or the reimplantation of fingers.

Glenn Orgias, a surfer who had his left hand reattached after a shark attack in 2009, was the beneficiary of leeching as part of his treatment.

Liverpool Hospital is the leader of leech therapy in NSW, using it between 10 and 15 times a year and distributing leeches to other hospitals around the country.

Formerly housed in a room containing cleaning equipment, the leeches were moved to their own room in the hospital’s orthopaedic and trauma ward this year.