Fevola stepping up in quest for big punt

Posted on November 4, 2012 by Pete Maxwell
Spread the love
Tweet 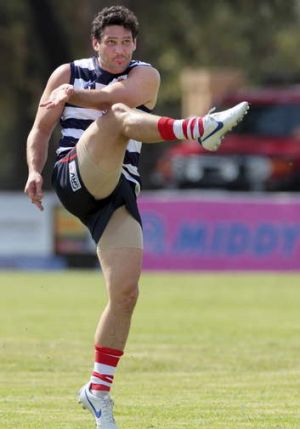 Former AFL star Brendan Fevola is knuckling down in his quest to become an NFL punter, but admits he has a long way to go before following in the steps of Sav Rocca, Ben Graham and Darren Bennett in the US.

The ex-Carlton and Brisbane Lions forward has been working with Bennett and familiarising himself with the NFL ball. He will step up his training sessions, with the aim of being ready for a serious NFL tryout within 12 months.

“The main thing for me to do now is to stretch, to do some Pilates and some yoga and get the tools back and get my leg over my head again. I’ve been on the couch for three years,” Fevola said on SEN this morning.

“It’s going to be full on now. I’ll start training three or four times a week with the [NFL] punt … [I’m] getting my body right which is going to be exciting and is going to help me with footy this year with the [Yarrawonga] Pigeons so I’m going to really put my foot down and get fit and get organised. It’s going to be an exciting challenge. It’s a long road ahead.”

“If I’m going to do it, I’ve probably really only got one shot, so if I go back now and don’t succeed, it’s probably all over. I’ll continually talk to Darren and we’ll video each other back and forth, and if I’m ready in about four or five months in August, I’ll go back over then, otherwise I’m looking at this time next year that I’ll be ready to go,” he said.