Hendra vaccine comes at a price

Posted on November 1, 2012 by Pete Maxwell
Spread the love
Tweet

Vets could charge between $130 and $220 for a dose of the new Hendra virus vaccine announced in Brisbane today, the president of the Australian Veterinary Association said this morning.

The vaccination is given to healthy horses.

It allows the horse to build Hendra virus antibodies — has little impact other than local needle-spot swelling — on the horse, but interrupts the disease’s development and stops it being transferred to humans.

Brisbane horse trainer Vic Rail and 14 of his horses died at his Hendra stable in September 1994 in Australia’s first known outbreak of the virus.

The virus has since killed a total of seven people and 81 horses and Australia’s $6 billion equine industry has expressed grave concern at the increasing number of outbreaks.

The vaccine has been developed over two years as a collaborative effort by international chemical company Pfizer and the CSIRO’s Animal Health Laboratory, along with scientific help from two US universities.

Within two weeks it will be available to vets across Australia. 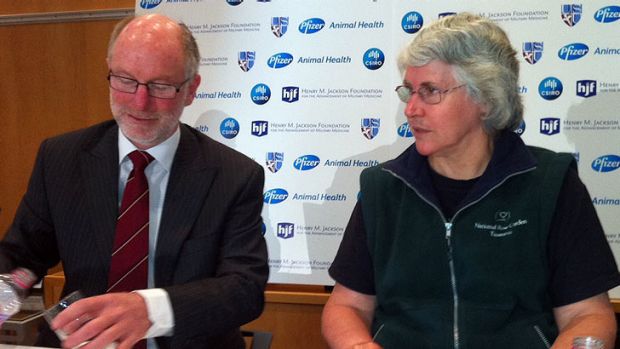 AVA president Ben Gardiner said the final price would be determined by each individual vet, depending on the number of horses to receive the vaccination and the costs of the clinic.

“At best guess, somewhere between $130 and $220 per dose, not including the cost of travel,” Dr Gardiner said.

“Now I may may be crucified for that — because I have no foundation to really go with it — but that is our best guess at this stage.”

Brisbane vet Nathan Anthony, who has two practices near Brookfield and in the Lockyer Valley, said vets would price the vaccine “sympathetically”.

Dr Anthony said he was yet to work out the costs of administering the vaccination.

“But veterinarians will price this responsibly,” he said.

“It’s in our best interests to. We want extensive uptake of the vaccine. If every vaccination is going to prevent human disease, that is what we need.

“Veterinarians will act responsibly, they will make it as affordable as they can.”

Dr Anthony said subsidies were not available to offset the cost of the vaccine.

He encouraged all horse owners — particularly in the Hendra virus hot-spot zones where flying foxes were found in Queensland and northern NSW — to vaccinate their horses.

“They have indicated that we need to administer two vaccines in the initial stages,” Dr Middleton said.

“And the second vaccine needs to come three weeks after the first vaccine.”

“But we need to gather similar data in horses in the coming weeks and months and that will be fed back to the industry with guidelines as to intervals for further immunisation,” she said.

Mike van Blommestein, from Pfizer’s Animal Health laboratory in Australia, said the vaccine would go to vets in Queensland and northern NSW first.

“That is our absolute priority to make sure that those hot-spots are addressed first,” he said.

“The plan is then to come forward 14 days — so two weeks from today — we will then make it available to the rest of Australia.”

Dr Middleton said she was relieved that a vaccine had been developed after 18 years.

“The pathway to transmission of this virus from its reservoir in flying foxes to people is through the infected horse,” she said.

“Our view has been that to interrupt the chain of transmission of disease from flying foxes to horses to people, is best addressed by reducing the risk of virus replication in horses.”

“I doubt it would be seen as a priority,” she said.

“But from a scientific perspective, yes it would certainly be a good starting point.”

The Queensland government has not made it compulsory for horses to be vaccinated but welcomed the development of the horse vaccine.

Agriculture Minister John McVeigh said horse owners should talk to their vets before making decisions about vaccinating their horses.

“The release of the vaccine offers real hope for the horse industry in the fight against Hendra,” Mr McVeigh said.

“It is important to stress, however, that this vaccine has been released under special conditions which must be followed.

“Only veterinarians who have completed an online training module managed by Pfizer Animal Health will be accredited to administer the vaccine.

“Queensland horse owners should discuss with their veterinarian whether vaccinating their horses is appropriate.”