Home brew is where the heart is

Posted on November 6, 2012 by Pete Maxwell
Spread the love 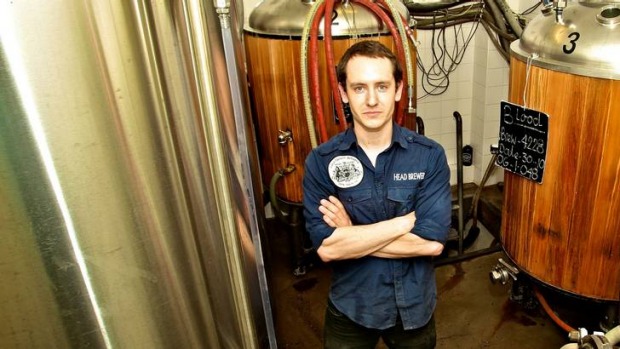 The Lord Nelson’s Andrew Robson has learnt the tricks of the trade from his DIY dad.

You could say that the head brewer at the Lord Nelson Brewery Hotel, Andrew Robson, has beer in his genes. His father, Mel Robson, was a home-brew mentor and friend to many – myself included – who started mash or all-grain home-brewing in the 1990s.

Mel was the senior operator of a wholesale/retail home-brew business, Eastern Suburbs Brewmaker, which became a training ground of sorts for a handful of his customers who graduated to careers in craft brewing: the senior brewer at Malt Shovel, Rob Freshwater; the head brewer at Mountain Goat, David Edney; the owner of St Peters Brewery, Matt Donelan; and Scott Morgan from Rocks Brewing are a few who come to mind.

Knocking out 20-odd litres of beer every weekend is not quite the same as brewing 600-litre batches several times a week, but that has been the pathway for such people who wanted to turn their hobby into a career.

”All the principles are the same but the techniques are different,” Andrew says of the leap from home-brewing to commercial brewing. ”It’s mainly about understanding the equipment.”

For 27-year-old Robson, the journey to join the ranks of craft brewing was an obvious choice. After leaving school a decade ago, he joined his father’s home-brew business, based in a warehouse at Peakhurst. ”That’s where I started mash brewing,” he says.

When his father sold the business five years ago, Robson joined the Lord Nelson – Sydney’s longest-running brew-pub – as cellarman and assistant brewer. When previous head brewer Damon Nott moved on a year ago, Robson stepped up to man the brewing kettle full time.

Robson is now brewing four times a week and trying to juggle available tank space to cope with the demands of the pub. ”[Over summer] demand is higher than the brewery’s capacity, which means there’s pressure to put new batches on a bit early,” he says.

Because most of the house beers are drawn directly from bulk serving vessels, Robson likes to give new brews a few days to condition before they go on tap. This allows the unfiltered house beers time to clear after they’ve been carbonated, but it’s also a luxury when customers need their favourite ale.

”I’ve got six [regular] beers to keep on top of and 95 per cent of beer pulled across the bar is made here. This is only a fairly small bar but we get a lot of dedicated regulars who like to drink our beers over a session – sometimes they get through a [600-litre] tank of Three Sheets over a weekend.”

To supplement the in-house brewery, production of the Lord Nelson’s bottled beers and some seasonal brews has been outsourced to the Australian Brewery at Rouse Hill. An American brown ale, 2IC, and One Eyed Rye, a refreshing golden ale made with 50 per cent malted rye, are two seasonal beers on tap at the Lord Nelson.

”We originally made One Eyed Rye with straight Amarillo hops,” Robson says, ”but I’ve been using [US hop varieties] Cascade and Simcoe as well in the latest batch.”