Posted on February 26, 2013 by Pete Maxwell
Spread the love
Tweet

LONDON Olympian Elizabeth Cambage posted an intriguing message on Twitter on Tuesday, questioning whether the antics of disgraced swimmer James Magnussen had impacted on other female athletes during the London Olympics.

Cambage, an Opals basketballer, wrote: “Have any other Olympic females athletes spoken out against Magnussen, because it went further than the swim team”. 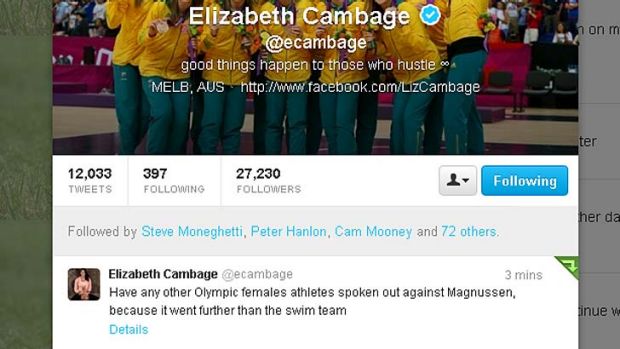 She then added: “And I’m talking about the Olympics not Manchester”.

However, the outspoken Cambage, while having lunch in Sydney, deleted the tweet soon after.

“I deleted the tweet as I have nothing to say, it was a question! Media just went wild on it.”

Some hours later, Cambage then tweeted: “I apologise if my comments have been misconstrued. In no way was my tweet meant to be an allegation against James #magnussen.”

Tuesday’s offerings are not the first instance of Cambage causing a stir via Twitter, having questioned swimmer Stephanie Rice’s friendship with US basketball star Kobe Bryant at the London Games.

Bryant and Rice caused a social media frenzy when spotted sitting side by side at the cycling at London 2012.

It prompted Cambage to tweet: “I love how Kobe has his wife with him at the Olympics, yet still surrounded by groupies.”

Magnussen and the men’s 100m freestyle relay team, also featuring Eamon Sullivan, Matt Targett, Cameron McEvoy and Tommaso D’Orsogna, have admitted to a Stilnox initiation at a pre-Olympic camp in Manchester and of disturbing female teammates on that same night.

Magnussen and his relay teammates could soon face punishment when they appear before swimming’s integrity panel.

Magnussen has said he regrets the incident. It was his first time using the medication.

The man known as the “Missile” said Stilnox had been used in “a lot of swim teams in the past”. He said the men’s relay team had been hoping to bond and did not intend to harm other swimmers.

Silver medal-winning backstroker Emily Seebohm revealed last week she was the swimmer who complained to head coach Leigh Nugent about misbehaviour in the London camp.

Seebohm went public after Nugent initially said he was not aware of any misbehaviour.