Milford to keep firing for Raiders for extra year

Posted on November 13, 2012 by Pete Maxwell
Spread the love 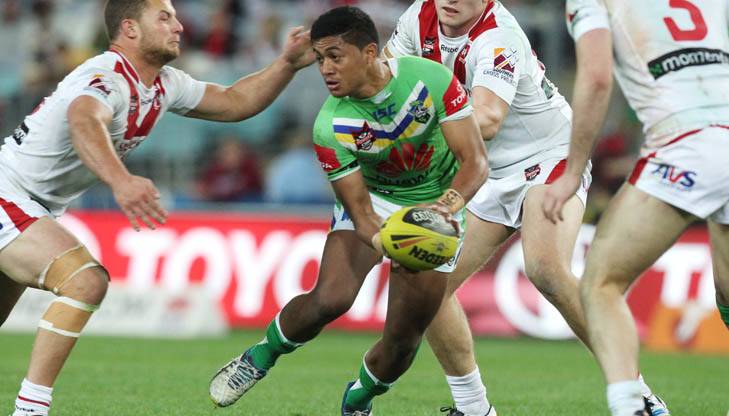 The Canberra Raiders will throw Anthony Milford into a physical initiation against men 10 years older and 30 kilograms heavier to see if the teenager is ready to make a stunning rise into the NRL.

Despite being homesick and chased by the Brisbane Broncos, Milford on Tuesday extended his contract with the Raiders and will remain with the Green Machine until at least the end of 2014.

The 18-year-old completed a superb 12 months by leading the Raiders’ S.G. Ball and under-20s teams into their respective grand finals.

Milford has been touted as a future superstar and likened to Benji Marshall,  with coach David Furner declaring he has ‘‘the best footwork’’ at the Raiders.

Furner has no doubt Milford will be able to make the transition to first grade. But how he handles training against men will determine the time frame.

‘‘It’s a tough pre-season when you make the step up … Tony certainly has first grade ahead of him, but when just depends on his development,’’ Furner said.

‘‘He’s got tremendous footwork and probably the best footwork at the club.

‘‘Pre-season will tell you a lot. When you do the opposed session, you can see if  they can handle that environment. It’s about fast-tracking them.’’

Milford was toying with the idea of returning to Brisbane after getting homesick in Canberra.

But it is understood one of the incentives to remain with the Raiders was a chance to do pre-season training with the NRL team, despite having another two years left in the under-20s.

His speed and elusive footwork saw him emerge as a star of the future for the junior Raiders teams.

Milford also caught the eye of representative selectors and the junior Kiwis were poised to select him before he pledged his commitment to Queensland.

And while he admitted the opportunity to return home was enticing, Milford said he wanted to make Canberra his long-term home.

‘‘It was pretty tough [to make a decision], but sacrifices had to be made,’’ Milford said.

‘‘I’ve had a lot of great help [in Canberra] … I made the decision based on family.

‘‘I struggled this year [with homesickness], but I got through it and I’m happy to be here.’’

With Milford’s deal finalised, the Raiders will turn their focus to Josh Papalii’s upgrade for the 2014 and 2015 seasons.

However, uncertainty over the NRL salary cap is delaying the progression of contract talks.

Papalii has declared his desire to remain in the capital and the club is confident it will be able to secure his signature when salary cap details are released.

The Raiders returned for pre-season training last week, but veteran Shaun Berrigan was a notable absentee.

Berrigan is refusing to sign a deal to play on for another season until the salary cap is finalised.

Until then, he will train by himself in Queensland but Furner is confident a contract can be sorted in the coming weeks.

The Raiders will be boosted by the return of skipper Terry Campese next season. He has missed the majority of the past two years with injuries, but Furner said he had no plans to take the captaincy duties away from the playmaker in an attempt to lighten his workload.