On Thursday I spent the day with a close friend at the National Gallery of Victoria to see this year’s collection of Melbourne Winter Masterpieces – a selection of paintings produced by Monet throughout his lifetime. If you are familiar with the NGV and their exhibits you may know that every year they launch a special exhibition called ‘Melbourne Winter Masterpieces’ featuring amazing borrowed works from around the world. Last year there was a focus on the secessionists of the early 20th century, this year was Claude Monet.

The exhibit was fantastic and I would definitely recommend it. The Paintings spanned across three rooms with a fourth interactive video room and final theatre room with footage of Monet’s Garden at Giverny today.

The first two rooms of the exhibition featured a diverse selection of landscapes and portraits exhibited in chronological order to cleverly explain the artist’s personal life and the experimentation and growth of his impressionist style.

The third room, comprising only of landscapes of Monet’s Garden at Giverny, I found to be a little monotonous, though this is partially down to the fact that towards the end of his life, Monet’s eyesight was failing, causing many of his paintings to appear similar in their vague representations of shape and melting colours across the canvass. Lets just say it’s a good thing he specialised in impressionist works.

Nevertheless the vividness of colour, and the sheer passion expressed through rushed brushstrokes was rather inspiring.

Two of my favourite works from the exhibition were from Monet’s time spent in London. I hadn’t really considered anything beyond his rural landscapes and garden paintings before, so I was pleasantly surprised to stumble across these during the exhibition. 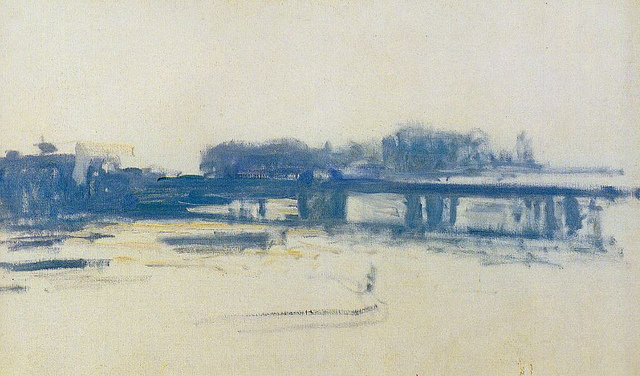 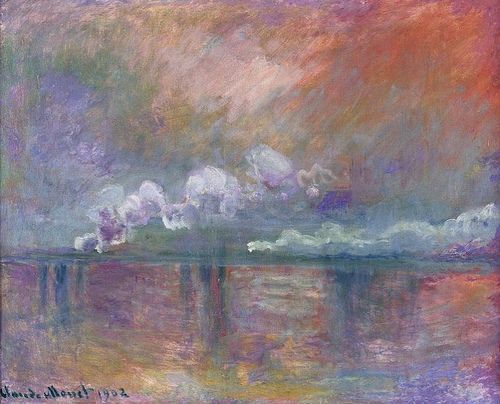 What inspires me most about these works is not what is painted but what is assumed. Particularly in the second, we cannot make-out a train crossing the bridge, though if asked to locate it, we could easily draw in where it would be. The way in which the smoke in the middle inspires our understanding of the rest of the image is a wonderful concept to me. The black and white sketch above I love for its simplicity. Black and white are not colours I would usually associate with Monet, so I think I was particularly drawn to this piece because of its uniqueness amongst the vibrancy of the other paintings in the exhibition. It’s amazing how weather conditions and a sense of dreariness is expressed in this image through the softness between the black and white on the canvass. Just as Monet is able to blend his colours in other paintings, creating rainbow-like effects, he is somehow also able to seamlessly blend black and white, to the point where it is difficult to assess where one shade ends and the next begins. I suppose that is the essence of impressionism.

Anyhow there is of course much more to Monet and his paintings, but I do believe that criticism and appreciation of art is a rather subjective thing, and I’m still learning – so my assessments of the exhibition are no doubt incomplete.

One of the highlights of the exhibition really is the short film at the end. It is projected across concave wall, creating a tunnel-like effect, and is one of the most beautifully tranquil things I have ever experienced. I really to encourage people to go to the exhibition, student tickets are only $22.50 and we had a cheeky cuppa and some cucumber sandwiches in the tea rooms afterwards. I honestly cannot think of a nicer way to spend the day.

I’m back in Sydney now and uni starts tomorrow. Unfortunately my month of culture and relaxation
has come to an end. Though I’d be lying if I said I wasn’t somewhat excited to see what this semester has in store for me!