Posted on October 15, 2012 by Pete Maxwell
Spread the love
Tweet 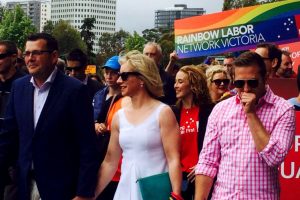 About 4,000 people and about 130 organisations took part in the march today.

About half of the Victorian cabinet attended, along with police and about 200 members of the CFA, who for the first time, wore their work uniforms in the parade.

Mr Andrews, the first Premier to lead such a march, said it was important to send the strongest possible message that every Victorian has the right to be respected and to feel safe “in being exactly who they are”.

“That’s something that’s critically important to me and my Government. This is a new government and we have different priorities and equality is not negotiable,” he said.

He promised to continue to push for same sex marriage in the federal sphere and said he would introduce laws on adoption equality.

“My view is a person’s gender identity or sexual orientation has nothing to do with their capacity to be a loving and caring parent,” he said.

Minister for Equality Martin Foley said it was important to send a strong message of support for the community.

Australian Equal Opportunity Party’s Jason Tuazon-McCheyne said it was fantastic that both Government and Opposition MPs attended the march.

“It’s good to see them being more brave and standing up for the 10 per cent of the population they represent and realise that we need to have full equality in this state,” he said.