Posted on February 27, 2016 by Pete Maxwell
Spread the love

Len Ainsworth quietly sips a cup of tea in the austere boardroom of Ainsworth Game Technology.

The 92-year old pokies king has just engineered a near $500 million jackpot after selling his majority stake in the company he founded two decades ago to Austria’s Novomatic. And he’s clearly feeling pleased with himself. 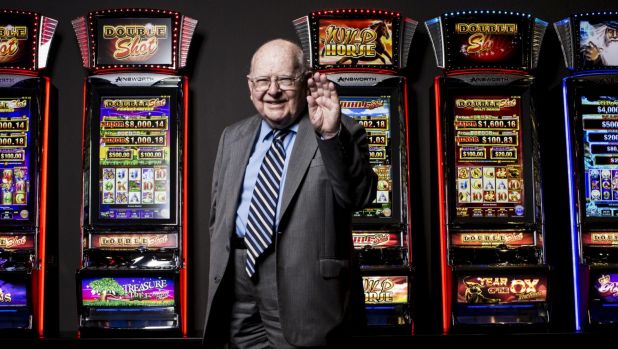 “It’s not a bad result for an amateur,” chuckles Ainsworth.

Given Ainsworth’s status as the world’s oldest pokies magnate, there have been no shortage of suitors lining up over the years with offers to buy his stake. 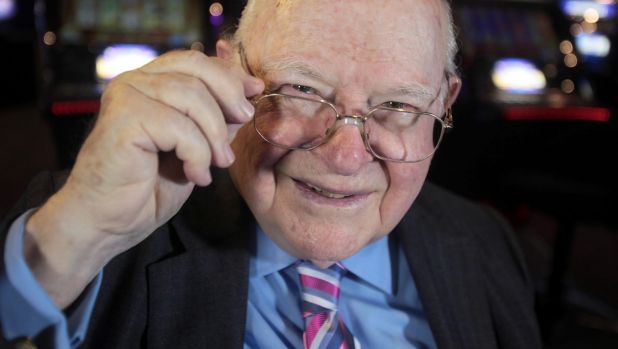 Worried about the growing problem of gambling addiction, politicians in Austria and Germany had started to impose new regulations on pokie and casino operators forcing Novomatic to look offshore to keep growing its revenues.

Ainsworth immediately agreed. Graf, dubbed “Deus ex Automatica” meaning God of the Slot Machines by his staff, had been enormously successful in conquering large swathes of Europe with a mixture of pokies, casinos and lottery terminals.

But Ainsworth knew he had a winning hand.

“They realised they had no chance of getting into Australia by themselves given Aristocrat and ourselves dominate sales here. But they made their intentions known.”

The talks were constructive, but momentum stalled. Ainsworth Game Technology was making a big push into the US market and corporate consolidation was shelved.

It’s not a bad result for an amateur.
Len Ainsworth

By late 2014 Halle had moved on to join Novomatic’s rival, the Gauselmann Group, and Ainsworth assumed that spelt the end of the buyout discussions.

It took another poaching – this time from right under Ainsworth’s nose – for Graf’s Novomatic to get back into the game.

“Graf pinched him plain and simple,” Ainsworth laughs. Within weeks Dijkstra had re-established contact with Ainsworth and invited him to Vienna for a tour of the Novomatic business empire.

Ainsworth agreed to a visit, but on his terms. He was already planning to attend the ICE conference in London in the first week of February and would meet Graf immediately prior in the Austrian capital.

Ainsworth boarded a Singapore Airlines flight to London checking into the 5-star Hotel Sacher, filled with 19th century artworks and adjacent to the Vienna State Opera.

Ainsworth took in a whistlestop tour of Graf’s offices in the suburbs of Vienna followed by a trip to the Czech Republic where Novomatic assembles its machines.

Several lunches and a private dinner with Graf and a member of his advisory board laid the groundwork for a deal.

Ainsworth had no bankers or advisers with him on the trip, but stayed in constant touch with his long-time confidante Stephen Cohn, a former finance director of Aristocrat Leisure, who provides counsel to the pokies veteran on his investments.

“If Stephen said to me no don’t do it I wouldn’t have done it. Its very clear cut. I knew it was the right fit for me.”

While a handshake between the two gaming gurus indicated a deal was on the cards, details still needed to be flushed out.

Ainsworth relocated to London and his favoured Royal Garden Hotel in upmarket Kensington.

Graf along with Ainsworth and AGT chief executive Danny Gladstone ironed out the negotiations on the sidelines of the ICE trade fair.

Despite his private persona, Graf was hard to miss. “His booth was half a bloody acre, the biggest by far,” Ainsworth smiles.

Graf kicked off the tense takeover tussle with a low-ball bid of just $2.25 a share for Ainsworth’s 53 per cent stake. Gladstone immediately rebuffed the offer.

“Danny was with me and he promptly told Mr Graf that wasn’t good enough and he’d have to come up for some more,” Ainsworth recalls.

With Novomatic spinning off plenty of free cash, both Gladstone and Ainsworth knew there was plenty more firepower available.

They eventually settled on $2.75 a share and the proviso that Ainsworth would retain its ASX listing, keep Ainsworth on as chairman in his hope the company, which bears his name, will remain operating for decades to come.

Ainsworth decided to keep the details private until AGT released its half year results on February 23.

While the deal has been three years in the making, Ainsworth reckons it may be another year before it is sealed for good with probity clearances pending in Nevada and New Jersey.

And there’s also the small matter of minority shareholders approving the share sale.

Ainsworth dismisses any angst by investors on the register to the deal arguing it will help the company grow and compete with rival Aristocrat and international giants including Bally and Scientific.

“There’s some fellow squawking about the fact that the minority shareholders might lose out. He doesn’t know what he’s talking about,” Ainsworth retorts. “If this fellow had rung me I would have told him to take a Bex and have a good lie down.”

Gladstone will travel to Las Vegas this week to meet with Novomatic chief executive Harald Neumann where he will tour AGT’s new pokie production factory.

Ainsworth hopes that by year-end his share sale will be complete and he can turn his attention to philanthropic work.