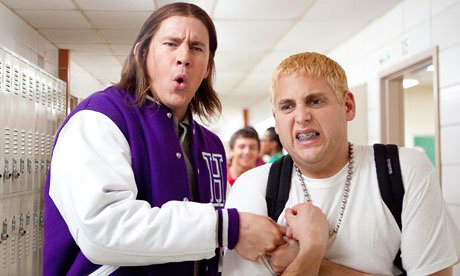 Not so much a stoner movie, perhaps more the result of film producers getting stoned, and talking about old stuff they can’t get out of their heads. This is the feature-length revival of 21 Jump Street, the late-80s TV cop show that featured a heart-stoppingly beautiful Johnny Depp in his breakout role. It had the unimprovable premise of cops chosen for their youthful looks to go undercover and crack down on youth crime. This now becomes a defiantly immature action-comedy starring Channing Tatum and a slimline Jonah Hill as Jenko and Schmidt, two appalling police officers who must get down with the kids.

Worst enemies in school, they are now cop partners faced with the humiliation of going back to high school as faux-teens to bust a drug ring. It’s not too much of a stretch. Being adult is the real imposture. But it is here that the former jock and nerd find that in this environmentally sensitive Obama age, their school status levels have become very different. Jenko bitterly blames it all on Glee.

It’s a funny twist on teen movies and buddy comedies, creating a postmodern Police Academy, and there’s a gloriously pointless freeway chase that reaches further back to the world of Smokey and the Bandit. Maybe the Brit patriot in me also detects the influence of Edgar Wright, Simon Pegg and Nick Frost – but imagining Frost losing as much weight as Hill is too scary.

In its outrageous way, 21 Jump Street has real laughs. Jenko has to move in with Schmidt at his mum and dad’s and experience the full horror of the kiddie photos on the wall. (“It’s like I’ve been murdered and this is a shrine to me,” Schmidt whines.)

In high school, they realise that all the macho values that once held sway are obsolete, and to Jenko’s considerable chagrin, it is shy, plump Schmidt who is now Mr Popular. Being adolescent is more a question of style than either anticipated; it’s all about maintaining a front. As our two heroes are told by their captain: “Teenage the fuck up!” Perhaps that last word should be “down”. But it’s funny.