Posted on February 22, 2013 by Pete Maxwell
Spread the love 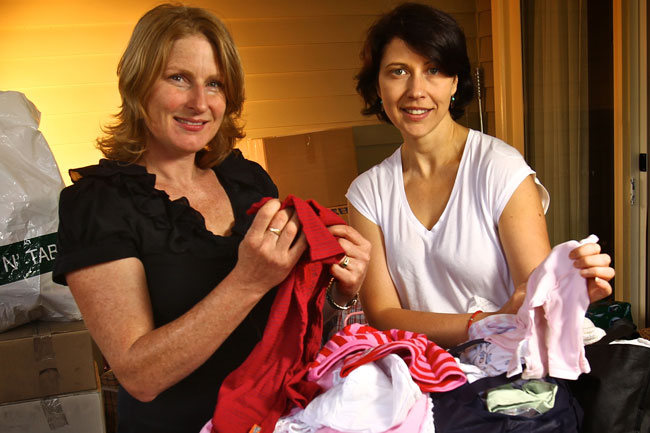 Since forming four years ago, Macpherson, and an ever-growing team of volunteers have worked tirelessly to give new life to pre-loved nursery equipment and children’s clothing, which is donated to families in need.

Macpherson, a Balaclava mother of two, heard from her maternal health nurse there was a desperate demand for items such as cots, prams and highchairs, as well as the basics – blankets, bibs and baby clothes – for disadvantaged parents in the area.

Working with a handful of friends and neighbours who also had babies, Macpherson launched a scheme that quickly became a vital resource for less fortunate mums-to-be.

‘‘It started with a few of us mums just keeping items and I told the maternal health nurse to get in touch if she needed anything for local families,’’ she says. ‘‘From there it has grown exponentially.’’

Since 2009, St Kilda Mums has re-homed more than 6000 items, fielding requests from 630 case workers and maternal health nurses from welfare organisations around the city, including Connections in Windsor and Hanover Welfare Services in St Kilda East.

‘‘No one else in Victoria is doing what we are doing,’’ says Macpherson. “The case workers have got no one else to get this stuff from.’’

With op shops no longer stocking second-hand baby equipment because of strict safety regulations, Macpherson says that more families are finding themselves stuck without the vital items they need.

‘‘Sometimes the only option for them is to scour through the hard rubbish,’’ she says.

The inspiring team of volunteers makes St Kilda Mums successful; the founding trio has grown to 163 helpers, most of whom are mothers – with some dads roped in too.

And Macpherson acknowledges they couldn’t do what they do without the supply of generous donations.

‘‘We had no idea what would happen when we started but we are getting more and more donations all the time,’’ Macpherson says. ‘‘It’s amazing how generous people can be; how much we have to give. Our supporters get a lot out of knowing their donations have gone out.’’

Donations are made on specified days, when committee members open their front doors to welcome everything from breast-feeding pillows to bassinets. Additional volunteers sort through the piles of donations.

Word is spreading about these donation events, thanks to St Kilda Mums’ 2700-strong Facebook following and an email distribution list that reaches 3000 contacts.

People who want to donate are directed to the website, which includes a list of the items the group accepts for re-homing and outlines the strict safety requirements for car seats, prams and strollers, change tables and high chairs.

‘‘For example, we won’t take a cot unless you can provide us with a copy of the manual,’’ says Macpherson. ‘‘We would check every piece of wood and panel of the cot and then use the manual to make sure all the bits are present.

‘‘We have lots of suppliers that we can contact and they send us replacement parts for free. We’ve worked really hard to develop relationships with businesses to make sure things are suitable for re-homing.’’

St Kilda Mums wants people who donate to know they are a part of something meaningful. ‘‘We describe ourselves as a network,’’ says Macpherson.

‘‘We don’t want to be like the op shops where people just dump stuff on us. We want people to work with us to make sure we have clean, safe things to give families in need.’’

The group’s efforts have attracted the support of community organisations, including Sacred Heart Mission, Salvation Army and the Brotherhood of St Laurence, which pass on items that cannot be sold in their stores.

After each donation day, volunteers embark on the mammoth task of sorting and packing the items. Team members repair, refurbish and clean items of furniture, sew missing buttons on clothing, replace faulty zips and spruce up toys.

‘‘Clothing needs packing into bags and safety checks need to be done on equipment,’’ says Macpherson. ‘‘So if it’s clothes for a baby girl, we will pack a bag with birth to size one clothes, so there might be around 100 garments. The mum is then getting everything their child needs for its first year and it’s all beautiful quality.’’

The bags are stored in Elwood, at a modest garage lock-up donated by a local family two years ago.

‘‘Everything gets transported to the lock-up and it fills up within a week,’’ says Macpherson. ‘‘I hosted a donation day in Balaclava recently and it took us six car loads and a ute to get the stuff to Elwood.’’

The goods in this unassuming suburban lock-up change lives. Case workers come from as far away as Sunshine and Pakenham to distribute the goods to their clients.

‘‘All the ladies who meet the case workers are mums and they can suggest things that the new mums might need,’’ says Macpherson. ‘‘We give them as much stuff as possible. They normally leave with a lot more than they came to pick up.’’

Erin Black, a support worker at Hanover Welfare Services, says the service is vital to making sure many of her clients are prepared for the birth of their babies.

As the number of pregnant women suffering housing and financial difficulties balloons against an increasingly competitive rental market, Black is adamant her service could not manage without St Kilda Mums.

‘‘They have filled the gap for us,’’ she says. ‘‘We are just so limited in what resources we have and often those resources don’t cater for us to be able to get what a new mum needs. It’s more to set them up with housing and make sure they have food and medical care.’’

Black says before St Kilda Mums, caseworkers had to try to access funding through agencies so they could buy items for mums-to-be.

‘‘When we go to St Kilda Mums they make sure we have all the stuff for a baby when it is born,’’ she says. ‘‘Then when we hand it to the women, some just burst into tears because they are just not used to being given things.’’

Hampton East mother-of-two Kristina Anderson was overwhelmed by the help she received from the group when her family fell on hard times.

Anderson moved from New Zealand to Melbourne expecting her second child. Her partner could not find work and the family struggled financially. ‘‘We didn’t really have much to live off at the end of the day,’’ she recalls.

‘‘We were put in touch with St Kilda Mums through my case worker at Connections, we really needed things like a stroller and clothes.’’

Anderson and her partner were humbled by the response they received. ‘‘They gave us a bag of clothing for my daughter, for a two-to-four-year-old, and there’s a lot of stuff that doesn’t fit yet, so she still has new things to wear. It’s all really amazing quality stuff – some of the clothes still have tags on them.’’

The help didn’t end there. A message of thanks from Anderson outlining her struggle was posted on St Kilda Mums’ Facebook page, prompting a supporter to offer the family a second-hand car.

‘‘The generosity of the people St Kilda Mums is connected with is unbelievable,’’ Anderson says. ‘‘It is a very overwhelming thing because you don’t expect them to give so much when they don’t even know you.’’

Demand for the service continues to grow, says committee member and mother-of-two Maya Donevska, of Elsternwick. She says the committee is determined to continue expanding to meet demand. Donation days are held across Melbourne, but with limited resources, there are challenges on the horizon.

‘‘Our biggest challenge is finding room to accept donations and store them, but we have no alternative at the moment – it’s a big commitment for us to take on a commercial lease,’’ says Donevska. ‘‘It’s wonderful we have grown as quickly as we have, but now it’s taking it to the next level.’’