Posted on November 17, 2012 by Pete Maxwell
Spread the love
Tweet

IT SEEMS the racing world is falling apart. Alleged drug use, a continuing list of betting scandals and heated clashes are forever attached to the legacy of the 2012 spring carnival and, with no Black Caviar to hide behind, horse racing’s many ills have been laid bare like never before.

Heads, some of them famous, will roll and so they should. Wrong-doers, both licensed and not, will pay the price for their actions or indeed inaction and so they should. The racing game will be held to public examination and, in all likelihood, to ridicule over the next few months as offenders are dealt with. The saying of ”no pain, no gain” is apt but even more so is the observation that while pain is necessary, suffering is optional. 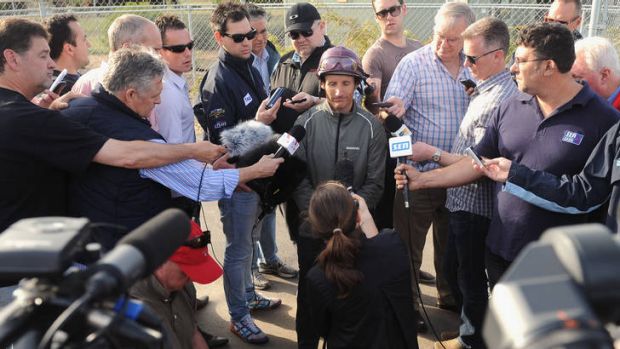 Many in racing fear that such far-reaching scandals will do irreparable damage to the sport’s image, but the rusty wheels of justice are turning again and so the ugly process racing now faces may indeed cleanse the industry rather than smear it. Done right, this almighty sweep of the broom can set racing up for a new golden era, where all participants play by the rules and where full disclosure is demanded from officials.

Putting aside the grand deeds of Black Caviar in the first half of the year, at a glance, 2012 has been an annus horribilis for horse racing in this country.

We’ve had jockey Danny Nikolic, who is at the centre of various inquiries for his conduct in and out of the saddle, disqualified for two years for threatening the chief steward. We have the most famous jockey in the land, Damien Oliver, caught betting on a rival horse. We have more jockeys warming on the back-burner waiting for their turn under the griller for various betting offences. Some will be minor, others career-threatening.

The betting scandals, especially the one involving Oliver, inflict pain that racing needed to take after a period of radical change to the ways we bet.

In a little more than a decade, the betting landscape has been turned on its head. When Oliver began riding some 23 years ago, there was just the TAB outlet or, if you went to the races, a bookmaker to bet with.

Now you don’t have to go anywhere. You can lie in bed all day and bet on any race, any sport. Your options are not limited to simply finding the winner, it pays just as much to find a loser as, with betting exchanges, you can bet against a horse winning. Options provide temptation and until now, temptation has not been properly countered by appropriate rules or by the means to enforce them.

Oliver’s case is far from being the first and will not be the last of a jockey caught illegally betting. Australian racing rules are clear – jockeys cannot bet on horse racing. Once that premise is established, though, it gets a little murky. There are no laws to stop a jockey’s partner or a family member from betting and while it is also illegal for a jockey to tip, there are no laws stopping a jockey’s next-door neighbour from listening to such advice and acting on it.

Racing’s rules regarding betting are varied depending on which racing jurisdiction you examine. In Australia, jockeys Blake Shinn and Peter Robl have spent a year or more disqualified from riding for placing a series of hefty bets. In New Zealand, a jockey can bet and face no sanction but in Hong Kong, a jockey that bets goes to jail.

In New Zealand, strict restrictions apply as jockeys can only bet on their own mounts through the government-controlled totalisator with racing’s controlling body having full invasive powers to check accounts, phone records and money flow. So confident they have control of the issue, officials even permit jockeys to use mobile phones in the jockey’s rooms.

Such laws, while alien to Australian racing fans, are relatively easy to police in New Zealand given the smaller pool of riders and that corporate bookmakers and betting exchanges are all but invisible in New Zealand.

All the same, the corporates have been a bonus for punters and also officials. Under the terms of their licence, bookmakers act as the first front for the integrity of racing. Any unusual bets, or any strange pattern of bets, are instantly reported to officials. In most cases, the red light flashes early.

Hong Kong takes the view that jockeys who bet ruin the confidence of punters so jockeys are punished merely for meeting with people who officials deem as unsavoury. Chris Munce soon discovered their reaction to jockeys that tip and punt.

While the 2012 spring carnival negatives are there for all to see, some positives out of the spring carnival mess are also easy to find. Like never before, stewards have been targeting trainers suspected of stomach-tubing their horses or treating them in other illegal ways on race day. Hooray.

Tubing and bi-carb use has long plagued the horse racing industry. The fact that the test for TCO2 (bi-carb) only goes so far has permitted some trainers to push the boundaries and to present their horse at the races barely under the allowed limit. They have an advantage, as their horses are believed to be able to run faster for longer.

Improved technology has meant trainers know when to tube their horses. But if they know the timing of the drench, so do the stewards. Those trainers who have consistently produced horses to race with elevated bi-carb levels, but under the legal threshold, can expect to see some plain-clothed stewards scaling their fence some day soon.

Most will catch on quickly and pursue a legal alternative to improving their horse’s performance. The others will need to find another job.

Sports editor’s note: chief racing writer Andrew Eddy leaves The Age today after 26 years. He has always been a thorough professional and his colleagues at The Age wish him all the best with what is sure to be a prosperous future.