This week make sure you..

Posted on December 18, 2014 by Pete Maxwell
Spread the love 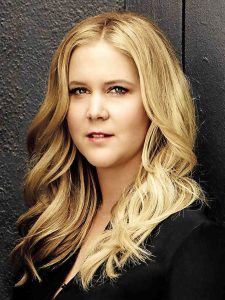 I meet Amy Schumer in a curious corner of Crown’s Club 23. Pushing through its black lace drapes feels a bit like consulting an Eastern mystic or, well, visiting a brothel. It’s clear the US comedian isn’t comfortable, but that might have more to do with her packed schedule than the location.

Most of her Australian media appearances could be best characterised as “awkward”. At her stand-up gig later tonight, she’ll describe her current publicity junket as “physical pain”. I ask if her (apparently last-minute) decision to perform a stand-up gig in Melbourne was an attempt to escape the junket and connect with her sizeable Australian fan base.

“It’s really not about me getting to know the audience,” she insists. “I just like doing stand-up.”

Doesn’t she thrive on her connection with the audience, though? Part of Amy’s appeal is the audience feels they really know her – she’s one of us rather than some lofty Hollywood ideal.

In her fantastic new film,

Trainwreck, she plays a thinly fictionalised version of herself, as if conscious it’s the “real” Amy people want.

“I don’t know what people want,” Amy insists. “I wanted to tell this story because it’s personal, it’s important to me and I think the message is good. I wanted it to empower people who’ve had some bad behaviour to forgive and love themselves.”

Inside Amy Schumer has been called “the most feminist show on TV”. She’s aware of the pitfalls that come with being seen as a spokesperson.

“People want you to be their dream girl, but you put a camera on anyone 24 hours a day and they’re going to disappoint you. I’m not going to become like a politician. I just want to be honest and authentic …’’

Given Amy’s screen persona is someone flawed, frustrated and unsuccessful, won’t the blockbusting success of

Trainwreck make it hard for her to keep being that person, authentically?

“I’m no happier today than I was when I was waiting tables. And the people I know who are really successful are usually the loneliest.” Amy laughs. “So I don’t foresee that being a problem.”