Posted on September 15, 2012 by Pete Maxwell
Spread the love 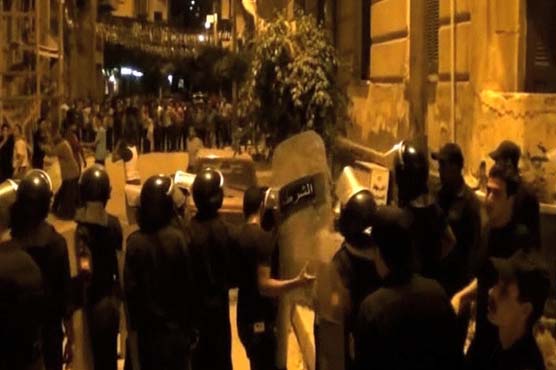 Anti-US protests by crowds whipped into fury by a film that mocks Islam erupted across the Muslim world, as violence exploded in Sudan, Lebanon, Tunisia and Yemen leaving five dead on Friday and dozens injured.The protests broke out when Muslims emerged from mosques following the main weekly prayers to voice their anger at the anti-Islam film made in the United States.President Barack Obama vowed Friday to stand fast against anti-US violence in the Arab world, as he witnessed the return to US soil of the remains of four Americans killed in Libya.Their sacrifice will never be forgotten, we will bring to justice those who took them from us. We will stand fast against the violence on our diplomatic missions, Obama said at Andrews Air Force base outside Washington.In Khartoum, guards on the roof of the US embassy fired warning shots as a security perimeter was breached by dozens of Islamic flag-waving protesters, part of a crowd of thousands who had earlier stormed the British embassy and set fire to the German mission, an AFP reporter said.

A police vehicle near the US embassy was also torched as hundreds of demonstrators broke through an outer security cordon after one protester was hit by a police vehicle and killed, a medic and the reporter said.The body of another protester was later found outside the embassy compound, but the circumstances of his death were not immediately clear.Police had earlier fired volleys of tear gas in a bid to prevent the 10,000-strong crowd marching on the US embassy after they had swarmed over the German mission, tearing down the flag to replace it with a black Islamist one before torching the building.European Commission President Jose Manuel Barroso condemned the embassy attacks as against the rules of the civilised world.Nothing justifies these kinds of attacks, he said.In Tunis, police firing live rounds and tear gas drove angry protesters from the US embassy, some of whom had stormed the compound, with clashes there killing at least two people, an AFP journalist said.The demonstrators had managed to clamber over a wall after setting several vehicles alight. Protesters also ransacked and torched an American school in Tunis, the TAP news agency reported.

Tunisian President Moncef Marzouki in a television address called the attack an unacceptable act against a friendly country.Violence also erupted in the northern Lebanese city of Tripoli, where a crowd of 300 Islamists attacked and set fire to a KFC restaurant, sparking clashes with police in which one person died and 25 were injured, security sources said.The attack came as Pope Benedict XVI arrived in Lebanon for a three-day visit, calling for Christian-Muslim coexistence and attacking religious extremism.And with tempers boiling across the Muslim world over the movie since the US ambassador to Libya was killed in an attack on an American consulate in Benghazi on Tuesday, the Pentagon said it has sent a team of Marines to Yemen.The announcement came as tension spiraled again in Yemens capital Sanaa, with security forces firing warning shots and water cannon to disperse crowds trying to reach the American embassy.Security forces blocked all roads to the mission, after similar confrontations left four people dead on Thursday, an AFP reporter said.With much of the anger directed at the United States, where the film was made reportedly by a Coptic Christian and promoted by a rightwing pastor, Washington had earlier ordered heightened security at its embassies worldwide.