Posted on October 17, 2012 by Pete Maxwell
Spread the love
Tweet 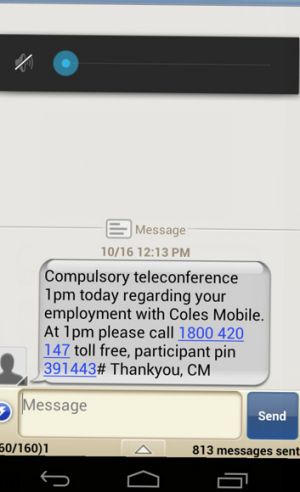 Nearly 120 workers at supermarket chain Coles have been axed after the grocer abandoned in-store sales of post-paid mobile phone contracts and accessories.

The workers first suspected their jobs may be in jeopardy when they received a text message received at about 12.15pm yesterday which ordered them to attend a mandatory meeting at 1pm.

Coles today confirmed that 51 permanent fixed contract workers and 68 casual staff, hired by recruitment firm Chandler Macleod, were told they would be losing their jobs during a teleconference yesterday.

The text sent to staff read: “Compulsory teleconference 1pm today regarding your employment with Coles Mobile.”

One of the affected employees confirmed he had been summoned to the dismissal teleconference via text message, and he soon learned he was not alone.

“I received multiple messages from coworkers thinking they were the only one who received it,” said the former full-time Coles Mobile staffer who asked not to be named.

In an email circulated at the time of the teleconference, employees were then told that their job had been terminated, effective immediately.

“You will no longer be required to return to your current position at Coles Mobile or finish your shift if you are working today,” said a note from Chandler Macleod which was distributed during the teleconference.

“You are most welcome to return to the store to say goodbye to colleagues and to pick up personal items and return anything that belongs to the Coles Store Manager or Duty Manager,” the note said.

BusinessDay understands there were no “undertakings or commitments about on-going employment” regarding the Coles Mobile jobs, but employees on fixed-term contracts received an additional week’s pay.

In the unsigned document, Chandler Macleod said newly redundant employees were welcome to apply for jobs vacancies at Coles.

Earlier today, Coles said it was modifying its sales of mobile phone products to better meet consumer demand, and confirmed the job losses.

“This change in our mobile phone business means a number of contracted employees will no longer have roles in our business,” said a spokesman for the company.

“These employees were engaged on either fixed-term contracts or as casuals, in recognition that they were participating in a trial.

“However, Coles has sought to do the right thing by these contract employees, by giving them additional payments,” said the Coles spokesman.